Any Planet Is Earth is LIVE 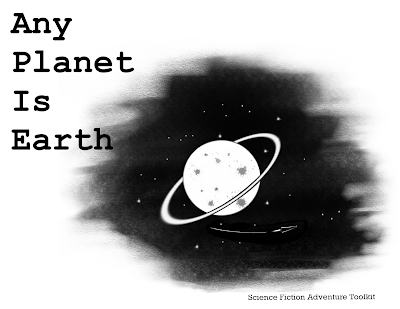 Welp, after several months of writing, refinement, and relentless editing for concision, my little sci-fi game, Any Planet Is Earth, is live and available for sale at DTRPG and itch.io! To say I am pleased with it is an understatement. I am pumped! I want to give a big thank you to those who provided excellent feedback, playtesting, and inspiration to the project, and a special shout-out to Jeff Woodman who put together the evocative and brilliantly simple cover art (the little ship is my fave).


Any Planet Is Earth is a set of sandbox guidelines for creating a near/far future adventure campaign. With an emphasis on realism, lateral thinking, and simple rules, players will seek jobs, bounties, trade, and rumors, accept death, and try to leave their mark on the starscape which naturally emerges from details, dilemmas, and decisions. The game takes its inspiration from Marc Miller's Classic Traveller, Chris McDowall's Into the Odd, and Ambrosia Software's Escape Velocity series.

At only six pages, the game zeroes in on focused tools to help both players and referee indulge and expand upon the context of the game world and twenty-three 36-result tables to generate NPCs, worlds, crises, trade goods, conspiracies, and myriad other decision points. The game features four pages of rules, including character creation across military, expeditionary, and mercantile career paths, conflict, trade, starships, interstellar travel, and referee resources, as well as two full pages of random tables for quick and interesting content creation.

The game itself is played simply with 2d6 rolls for players, but the emphasis on critical thinking and leveraging the game environment at any given time pushes the players and referee both to lean into the context of the game world and treat it like a real place. Description first, abstraction second. Everyone at the table drives forward to promote emergent narrative and unexpected twists.

In addition to the rules download you'll also get a single-page spread including a character creation walkthrough, example pregen characters, and example pregen starships and crew loadouts.
Posted by Jim Parkin at 11:35 AM