When Eclectic Bastion Jam was announced back in July, I decided I wanted to try my hand at writing a full-scale RPG hack based on Into the Odd. I'm all for pulpy fantasy like Conan the Cimmerian, Fahfrd and the Gray Mouser, and Dying Earth, so I set to work putting together a proper Sword & Sorcery hack of the Bastionland family of games. 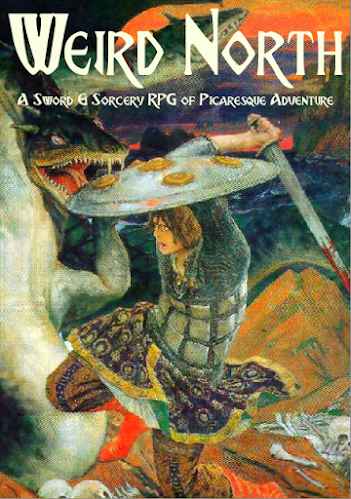 At forty-five total pages, Weird North is a stripped down ruleset which is easy to learn, use, and adapt.

- A simple but punishing inventory and encumbrance rubric forcing tough choices about treasure and lackeys.

- Corrupting magic with a chance to turn your players into snake people, demons, and eldritch pillars of otherworldly strangeness.

- Six archetypes for players to delve into the flavor of the world, such as the grave-robbing Sepluchrite, the weapon-mastering Contender, and the rat-controlling Dirtfriend.

- Genre-focused public domain art, clean layout, and a magnificent character sheet designed by Cosmic Orrery.
You can download the PDF in pages and spreads, the plain text rules under CC-by-SA 4.0 sharing, and character sheets in A5 and Letter size for $6.00 at DTRPG and itch. The DTRPG page has a preview of everything but the generators and gear lists. The full description is below. 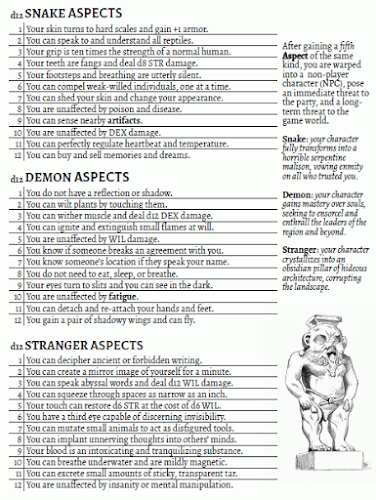 WEIRD NORTH is a role-playing game for one referee and a handful of players. Players take control of wandering sellswords and adventurers, exploring a huge and curious world in order to claim great wealth, expand their renown, and achieve personal goals.
What This Is
- An RPG is a conversational game where everyone at the table plays in a shared world of imagination.
- This game centers on questions, creativity, and nuance, all of which form an emergent story.
- Player characters are empowered, but vulnerable. The world is huge, and filled with places to explore.
Who You Are
- The referee is a neutral arbiter of the world, presenting information and circumstances clearly.
- The players take the world at face value, treating it as real, consistent, and full of both risk and reward.
- Together, you trust each other to engage with a shared setting, objectives, and consequences.
Sword & Sorcery
- The universe is decadent, mostly dead, and without vested interest in cosmic good and redemption.
- Any given world is rent apart by ancient machinery, fell magicks, and intervening godlings.
- Humankind bands together to manage a living, but tensions are high and threats are everywhere.
Picaresque Adventure
- You play as and compete with daring scoundrels, out for treasure, power, and reputation.
- Opportunities abound for high-stakes expedition. Your context is dangerous, but you have grit.
- Fair fights are bad odds. You need to negotiate, plot, haggle, ally, and deceive to survive.
Inspiration
- Howard's Cimmeria, where Conan slogged against petty rulers and snakepeople for profit and renown.
- Vance's Dying Earth, where Cugel crossed through portals to far sanctums while his own world rotted.
- Lieber's Lankhmar, where Fafhrd and the Gray Mouser fleeced nobles with bounties on their own heads.
Thanks goes to Chris McDowall for creating Into the Odd and Electric Bastionland,  David Black for The Black Hack 2nd Edition, the Bastionland Discord for remarkable ideas and feedback, the yawning sea of pulp fantasy and science fiction authors of the 19th and 20th centuries for their communal wellspring of weird tales, and my young son who daily pores over Astonishing Swordsmen & Sorcerers of Hyperborea. 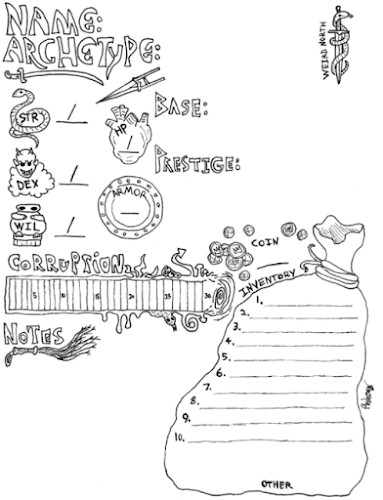 At present, I'm working on laying out print-on-demand files so anyone interested can snag a well-made physical copy of Weird North in the coming months.
Posted by Jim at 6:05 AM