The Dank Morass: A Swampcrawl for Weird North

So, the Gygax 75 bit is supposed to be weekly. Well, this second installment of my attempt is, uh, monthly. I blame my infant, my seminary degree, and Hearthstone*. That's at least a start.

With the help of my son, Ted (who has starred in all of my RPGs With Kids posts), I put together the first of what I hope to be multiple regional maps/crawls/supplements for Weird North. A while back I pitched him "a spin on the Dark Tower," which, of course he doesn't know about, given that I don't recommend suggesting Stephen King novels to children. He thought I said "Dank Tower," and stuck with it. It cracked me up, so I decided, yeah, Dank Tower, in some awful swamp filled with dinosaurs and relics from a bygone era. The Dank Morass was born, and now I will attempt to translate it here for your rudimentary use as I slowly hone it for my own purposes. So, well, I guess this is my second offical "Gygax 75" post. Hoo boy. 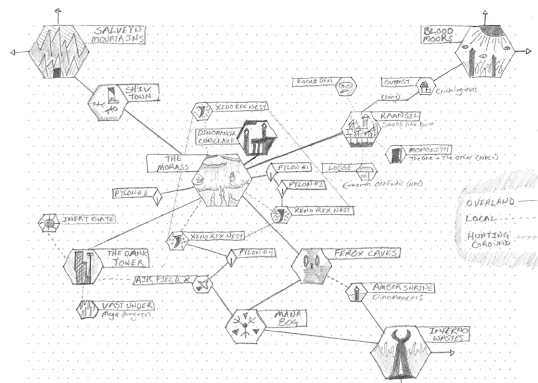 Aight, my sketching is terrible and my handwriting is chicken scratch. Deal.
The focus of this map is The Morass, which essentially encompasses the bulk of the territory. I found some old Reddit post a while back that sorta-kinda slammed point-crawls and hex-crawls together to get the sort of map shown above, and I like it a lot. The main hub for the region is Raansil, a village built on the edge of the swamp and sitting effectively on a stilt platform. Therein you'll find Ekventh Oldfinder, a local warlord obsessed with old tech, and a pair of serpentine malisons who actually run the town: The One, and The Other. The latter pair lives inside of a giant black monolith that rises out of the marsh without explanation. It's dark inside, and they like it that way.
The biggest denizen of The Morass is the xeno-rex, a spider-eyed tyrannosaur variant that doesn't do the whole Ian Malcom "Life Finds A Way" Spielberg roar, but resonates deep in its chest like an alligator or real giant reptile. You'll hear it's footsteps at the same time as its unnerving infrasound rumbling, then you'll probably perish quickly and without ceremony. Three xeno-rex nests flank the main hunting ground of the swamp, so any encounter tables ought to include them. Good luck, have fun. Watch as the cups of water you've hauled with you into this gross place ripple and reverberate with each footfall.
Random Encounter Table (2d6)
1. Xeno-Rex prime (one of five unique bosses)
2. Lone dinomancer scout with beast charm
3. 2d6 hungry kraks grazing on roots
4. Gilber, a lost treasure hunter from Raansil (1-in-6 is rabid)
5. 1d4 ferox shredding an unidentifiable carcass
6. 3d6 compsagnathus yipping and snapping over a wounded animal
7. Humming stone or vine organically tied to the pylon network
8. 1d6 territorial dinomancer amber shapers
9. 1d6 xeno-rex juveniles
10. Failed genetic left-off from the Dank Tower basement
11. Lone lost ancient robot sentry patrolling from the Dank Tower labs
12. "Night Lights" beaming down and incinerating the surface
From The Morass writ large you can connect easily to the various sub-adventure sites built into the region. These include the Mana Bog, the Ferox Caves, and old airfield, Shiv Town (all are welcome!), an array of mysterious pylons humming softly with ancient electricity, a cable network running beneath the moss and water, a conclave of cruel dinomancers and their hidden amber shrine, and the titular Dank Tower, which is a holdover from a time-lost epoch of consumerism and technodabbling. Beneath the Dank Tower is the Vast Under, a megadungeon I haven't even considered actually making yet, but exists in concept, and an inert gate leading to a pocket realm or other world entirely. Springboards for future fodder, as it were.
Finally we have three outlying regions which I intend on fleshing out similarly with this sort of treatment at some distant point: the Salveyn Mountains (dig a little deeper), the Inferno Wastes (y'all like demons?), and The Blood Moors (floating eyes and giant bats). So, there you have it. The Dank Morass. I'm already running this half-baked via PbP on Discord and I'm loving it. That's a solid pace to shamelessly crowdsource content while everyone enjoys the process...