Two years ago, I read Troika!, and besides the surreal whimsy of the implied setting by way of the many (d66, no less) backgrounds stocked within the strange pages of the book, I was smitten with the mechanics of the thing. A riff on Fighting Fantasy, the game supposes a robust advanced skill system which, unlike modern game-mechanism-forward iterations of "perception" or "arcana," presents us with treats such as "etiquette," "golden barge pilot," and "mathmology." 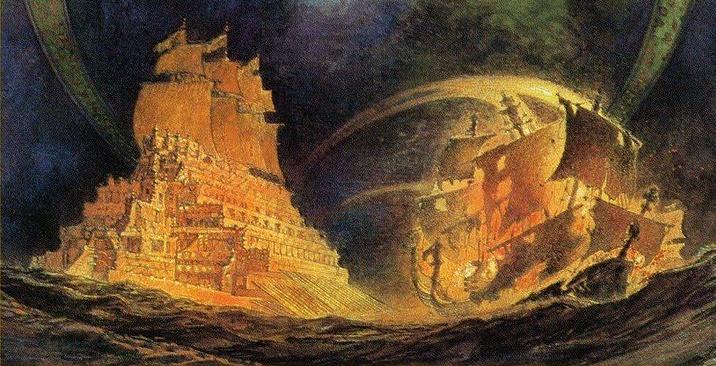 But seriously, look at how golden this barge is. See how it shines.

It's fun, evocative stuff, and situated in a game system wherein you/your characters chooses to do with regards to free-form interation with your fictional circumstances (through description rather than character sheet buttons). Advanced skills, then, are more a channel for that descriptive flavor to flow through rather than sit as inert abilities which solely overcome challenges on their own.

Overall, I tend to dislike combat in RPGs. I mean, violence as a means to an end is indispensible in a fantasy adventure game. However, I tend to quickly boil down the conflict to an inevitable numbers game, and sit around waiting for it to conclude. Dice and randomness certainly keep that waiting from being static, but it still tends to overstay its welcome in my opinion. What struck me about the weapons in Troika! is that while you roll an opposed 2d6+skill+advanced skill to see who gets to "win" and do damage, you only ever roll 1d6 for damage. This result then maps onto a results table unique to each weapon.

Roll a 5 with a knife and you deal 4 damage. Roll a 5 with a longsword and you deal 10 damage. Roll a 5 as a straight-up dragon breathing fire and you deal 18 damage. Lower results tend to skew to lower damage output, and higher to higher, as one might expect. The nuance, however, is two-fold. First, it's only ever a d6, which is simple to handle. Second, the overall range of results for any given weapon reflects its reliability and (in)consistency. Take the spear versus the maul, for instance:

A spear is easy to handle and control, leading to consistent results. A maul is heavy and reckless, leading to either glancing blows or sincerely smashing results. This makes for a push towards a bit more verisimiltude to how a given weapon actually performs in the fray, rather than a spear is 1d6 damage and a maul is 1d10 damage. Cool.

What else can we do with this besides damage? Can I lift up my spear to to block an incoming attack? Use it like a shield? What about the maul? The spear would probably perform admirably as a blocking implement. The maul, well, probably not as much, for its heft. That said, it could afford some protection in a melee. What if, instead of rolling opposed checks to hit in combat, we just assume that, hey, combat is close and intense, so you're always going to hit? That's more of a riff from Into the Odd's combat style, where damage is effectively an inevitability, but reduced by a certain limited amount of armor.

Scrap the to-hit roll, whether it's 1d20+stat or opposed 2d6 or what-have-you. Get rid of it. We don't need it. Add a defense attribute to each weapon table, then when you fight something on your turn, roll 2d6 rather than 1d6. You now have to d6 results, and can assign one to either side of the table.

Defense indicates the amount of damage you nullify until your next turn from any incoming attack. So that spear you're holding? Roll 2d6. You get a 3 and a 6. You can either assign the 3 to damage (6) or to defense (2), then slot in the 6 on the other side of the table (or vise versa). Similarly with the maul you can use a 6 for a massive smash in terms of damage, or a significant and dramatic block.

Troika! already provides damage results for shields, so why not provide defense results for everything else? Now each attack, even if it is still as simple as "I hit stuff," is a more interesting decision since you choose how to split your dice. It works just as well for ranged weapons, though defense results ought to be lower, overall, for how ungainly the fictional defensive actions are.

I, for one, could see this line of mechanical thinking applied to weapons for any old school game. Limit armor from typical sources to, say, 3 or 4 points total and leave the rest to weapons. Considerations on dual-wielding and further armor interactions will likely come in a later post.

EDIT: Luther at Archon's Court had the same brainwave just a few weeks ago over at his blog. Check out the post here.
Posted by Jim Parkin at 8:39 PM